Let's start out with a collection of radio modifications for the Sangean ATS 818 / Radio Shack DX-390 world-band receiver. I've owned my DX-390 since 1993 and it is a great radio that I would place in the "middle class" range of other portable receivers on the market. It has some nice features such as single-sideband AM (SSB) reception and strong FM sensitivity as well as a great AM sensitivity with the large ferrite rod. This radio has a surprisingly good sound coming from the 4 inch speaker. It has tone and RF controls to enhance your listening experience as well. Of course there are some drawbacks (no radio is perfect) including a highly sensitive shortwave circuit which can easily pick up static and nearby noise sources. There is also limited filter functionality for signal and audio bandwidth and station memory capacity commonly found on more expensive radios. It also mutes the audio while tuning and scanning for DX. The backlight only stays on for a short time and is not adjustable. I find myself pressing the light button a lot when tuning in a dark room.

The good thing about this radio is most of the drawbacks can be fixed to make it a much better radio for portable or home use.

As I mentioned earlier, the radio mutes the speaker when tuning. This is extremely distracting when trying to find active stations, chasing DX, or fine tuning SSB signals. I will show you how to disable PLL muting. It takes about 15 minutes to do this mod.

Luckily, Sangean and Radio Shack incorporate the muting signal on IC403, pin 47. A single wire travels from the controller board to the receiver board circuitry. We can cut one wire to eliminate it. 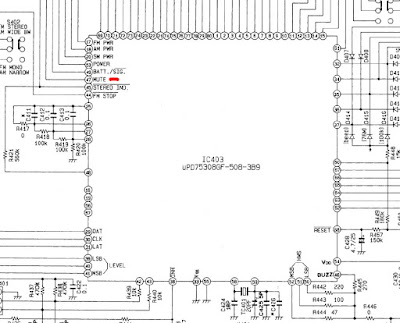 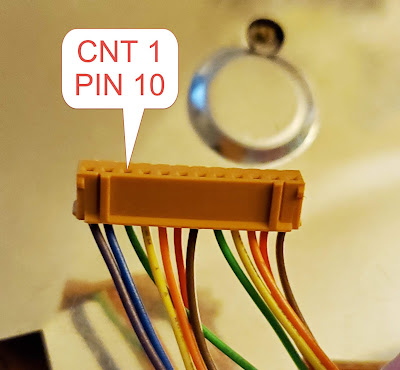 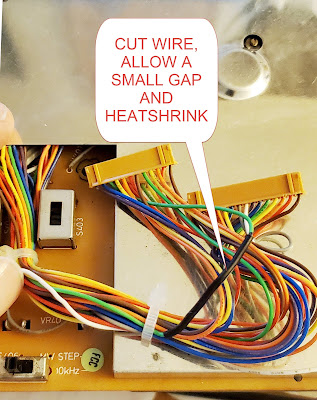 Your receiver now has the capabilities of SW radios that cost much more. Enjoy DX hunting! The next part of this series will cover the backlight timer. I will show you how to extend the 15 second limitation of the backlight and add an LED.

iPhone and Ham Radio - A Realization

Ham radio has many facets which makes it an enjoyable hobby. Homebrew and experimentation are two of them. How does the iPhone fit into this? It is not a ham radio, although it uses RF. I see the iPhone as a neat piece of technology that has apps for everything. That's great, but what about ham radio apps? There were over two dozen apps that I saw for ham radio and one of the newer apps is Echolink. This allows people to talk to each other on the Echolink network through their phone over a wifi network. I've recently talked to people on Echolink who were using the iPhone and the audio quality is great. I guess Apple put good mics in the phones.

After the brief wave of astonishment escaped my face, I started thinking about the good, bad, and ugly of using a smartphone for amateur radio. Back in the good old days of ham radio there was a device called an auto-patch. The auto-patch was used for making land line phone calls via a handheld or mobile radio, typically through a repeater. The repeater passed DTMF tones to the auto-patch, then to the telco. Audio was transferred using half duplex and it worked fine as long as the connection to the repeater did not drop. This was a really cool way of talking to friends and family as long as you didn't care who listened in. Before cellphones became popular, this was an elite technology to have. Did that just sound like the opposite of the iPhone Echolink app? It sure was!

I guess my point is RF links to land line connections existed for decades. We've just figured out a way to re-purpose them, right?

Now I don't think the autopatch hurt the hobby because it was heard by anyone on the frequency. This limited the amount of time spent on the "phone" as well as controlling the types of conversation. Is the iPhone good or bad for ham radio? Here is my observation..

Smartphones are evolving into handheld computers.

This is true and we have no way of knowing how far it will go. I have an Android smartphone which has a web browser, email, texting, music player, GPS, games, productivity apps, a full keyboard, wifi, and more. How much more can they cram into these devices? Those of you who use Echolink know it has to be connected to one of the designated servers using a computer with Windows or Linux. If your smartphone has a WiFi connection, how is it any different from a laptop or desktop pc?

Is Echolink still ham radio? I think so. It is a form of ham radio utilizing new technology. On the other hand, I believe that a ham radio operator should also continue to utilize our allocated RF space as well. Especially while it is still available to us. I'd hate to see the bands re-provisioned for non-amateur use.

A boy, a campfire, and a lake - My shortwave radio story

I've been a licensed ham radio operator since 1994, however, I've had an interest in shortwave radio since I was a kid. My first experience in shortwave radio listening was on a lake front cabin in the north woods of Wisconsin. Some friends of my parents invited up to their place to stay the weekend. We had so much fun swimming, fishing, hiking, and exploring during the day and sat around the campfire at night.

The sound of family chit-chat, frogs and crickets filled the air. We could look across the lake and see the faint flicker of other campfires int he distance and a pontoon boat floating quietly for some night fishing. You could look up in the sky and see a million stars and breathe the fresh air.  Great memories!

One night, I was looking for a radio to listen to after everyone went in the cabin to relax. I shuffled around the cabin and found an old Panasonic multi-band radio sitting on a shelf. I don't remember the model, but it was similar to RF-100MA. I was happy to see that there were batteries in it and quickly grabbed a snack and before heading back outside. I turned on the radio and tuned to some FM frequencies and tried to find some good rock music. To my dismay I was only able to to pick up one station that I liked. I fumbled with the bands and found the SW switch. I spun the tuning knob and quickly came across some strange foreign music. I listened for a bit and continued to tune around the band. I found a numbers station, a weather station, and some other stations. I was amazed that this radio could pick up all those signals halfway around the world!

I was so intrigued by this radio that I spent a couple hours outside listening to everything that I could find. It was a lot of fun! So much fun, that I did this every night we stayed at the cabin. It was a boy, a campfire, and his shortwave radio on the lake. Those were my fondest radio memories and sparked my interest in shortwave and ham radio.

How did you get into shortwave radio? Comment below.

Welcome to my amateur radio blog. The purpose of this site is to discuss and share information about amateur radio, shortwave listening, computers, and other technologies. Feel free to share your thoughts.