Of course, many of you also remember the movie, Frequency (2000) and a subsequent TV series.

What other shortwave or ham radio movies do you remember?

"Gone With the Wind" - 1939. Drama. The classic story of Brett and Charlotte as they try to save their 100 foot tower in the worst windstorm to hit Georgia since the Civil War.

"The Lost Contest Weekend" - 1945. Drama. Ray Milland in a dramatic battle on 20 Meters for one elusive QSL.

"I Was a Teenage Novice" - 1957. Drama. A troubled teenager (Michael Landon) finds fun and excitement after getting a ham license.

"It Came from Radio Shack" - 1977. Horror. Bill Bixby tries to keep a computer called TRS-80 from taking over the world.

"Rear Window" - 1954. Suspense. Alfred Hitchcock did several marvelous films heavy on the subject of ham radio. In this movie, James Stewart plays a man confined to a wheelchair, determined to break the CC&R's and put up an end-fed wire antenna going out his apartment window - without the neighbors catching on. Grace Kelly and Thelma Ritter also star. Watch for Hitchcock's appearance over in Ross Bagdasarian's apartment.

"The Man Who Knew Too Much" - 1956. Suspense. James Stewart shows up at an FCC testing office for his ham license. What he doesn't know is, he's over-studied for it, and is smarter than the examiners, who force him into working for them! Watch for Hitchcock's appearance as someone taking a code test! See if you can figure out what he's sending!

"The Birds" - 1963. Thriller. The classic about a bunch of people stranded in a Northern California town who find that the only means of communication to the outside is by way of some of them newfangled OSCAR satellites.

"Frequency" - 2000. Drama. Ham operator finds his radio can time warp and talk to his dad decades in the past. How does he expect to QSL? 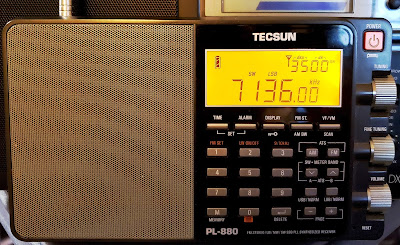 I picked up a broken Tecsun PL-880 from a customer who no longer wanted the radio. Here is the story and result.

The radio was owned by a ham radio operator who used it as a bedside companion. He said that it fell off the nightstand one day and crashed on the floor while a Tecsun AN-48X antenna was connected at the time of the crash. It damaged the connector and possibly some other components. He attempted to repair the antenna jack using a home brew method and said the radio never worked right afterwards. He reported that AM and Shortwave band reception was flaky and the tuning encoder wasn't working well either.

Here are some screen caps of a video he made about the repair. 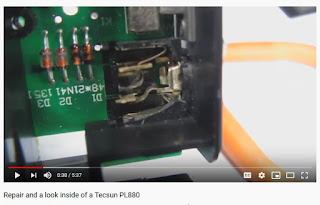 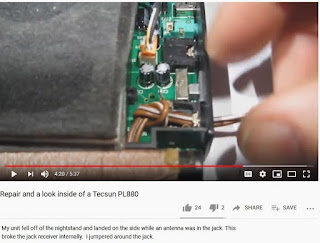 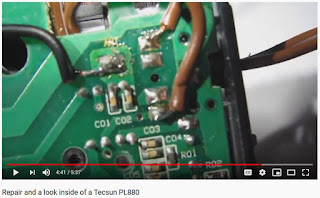 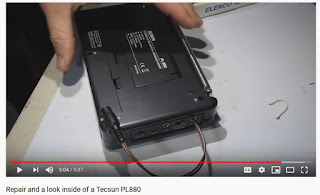 The radio arrived a week later and I put a fresh 18650 in. Powered up and tuned FM stations just fine. Switched to AM and shortwave - it was completely deaf. Normally the strongest AM station in town is able to come through on a crystal radio set, but not the Tecsun. The tuning knob was erratic and seemed to jump two steps or not do anything at all while tuning. Touching the tuning knob increased static to the radio.

A few ideas crossed my mind at this point.

My first look inside the radio. Notice the compressed brown wire next to the screw hole. There was a nick in the insulation from the screw. (The back of the radio case has a metal shield and pad to ground the radio to the PCB shield.) Also noticed several missing screws.

I removed the home brew connection and the broken  antenna connector, then installed a temporary jumper across the external antenna switch pads. Also cleaned up the solder flux and excess solder. I wanted to see if this was a simple fix. 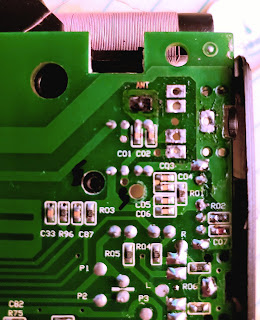 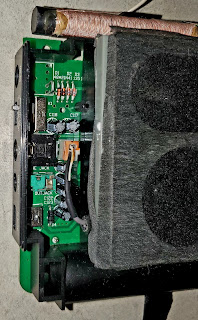 I powered up the radio and it was still deaf on AM and shortwave bands, but the tuning encoder works great now (suspect ground short from previous owner's repair).

Time to figure out the radio circuitry and trace/test components. I used my DMM, signal generator, and scope to make my way through the receiver. Immediately, I found a cracked diode in the protection circuit next to the antenna jack, I replaced it with a 1N4148. 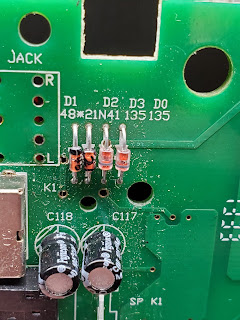 No other broken traces or failed transistors in the front end until I made my way to the mixer circuit and the signal died. I found a broken inductor on the board at L9. L9 is a .47uH fixed inductor that couples L6 to the mixer input for AM/SW. I cannibalized another receiver and replaced the component. Now the signal tracer was making it to Q7 and Q8!

I powered up the radio and tuned WWVH on shortwave. The radio came alive! Tested AM and it was very weak. Time to go back to the AM input circuit. Q26 tested fine, but the ferrite antenna leads needed to be reflowed as well as a broken wire repair at AM1. 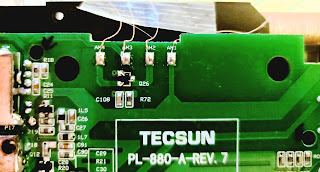 Tested the radio and AM came back to life! Now on to the external antenna jack. I ordered replacement jacks and soldered one in. 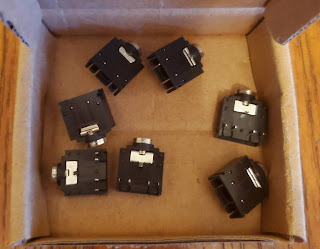 Now the radio is as good as new! External and internal antennas work. I did not need to perform an alignment on the radio as it checks out fine. (The RF shields need to be desoldered to perform a full alignment).