Hello radio enthusiasts. Many of you know of or have heard of Software Defined Radios (SDRs) especially if you read my blog. Well, I recently purchased another SDR to add to my gear. I wanted to try out one of the higher end SDRs on the market and see how they stack up against the RTL-SDR Blog V3

I looked at reviews, videos, demos, and feature comparisons of SDRs in the $100-160 range and narrowed it down to two devices. The SDRplay RSP1A and AirSpy HF+ were top contenders in this price range based on features and performance. Black Friday sales significantly brought the price range of these devices very close together. There seems to be a lot more reviews for SDRplay products so I ended up buying the RSP1A.

Here is my comparison between the RSP1A and RTL-SDR Blog V3. 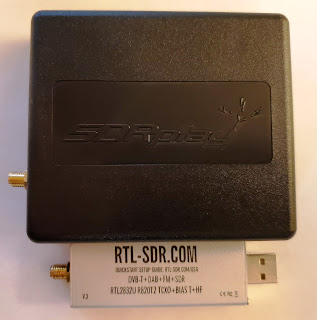 I used a 25 foot, indoor, longwire antenna with 3 feet of RG314 coax terminated to a SMA female connector. This antenna was connected to a SMA Tee so I could run the RSP1A and V3 simultaneously on the same Windows PC. Frequencies used were in the HF band in the early evening and late afternoon. SFI was about 85 during the tests.

Contender 1: SDRplay RSP1A ($120 USD) The RSP1A boasts a 14 bit ADC with up to 10MHz bandwidth, simultaneous connections, and selectable notch filters (AM/FM/DAB) using SDRuno software. It's frequency coverage is 1KHz to 2GHz. Installation of the drivers and SDRuno software were really easy. I had the RSP1A up and running in about 15 minutes. Datasheet link here.

Contender 2: RTL-SDR Blog V3 ($25) The RTL-SDR Blog V3 uses a 8 bit ADC with up to 2.4MHz bandwidth. There are no onboard filters for AM/FM/DAB. Frequency coverage is 500 KHz to 1.766 GHz. Driver installation and software installation were not quite as smooth as SDRplay, but it wasn't too bad with the excellent tutorials online. Datasheet link here.

Both units were configured with medium AGC and full use of the internal RF amplification available in the software settings. Both devices were calibrated to WWV and matched for DB/Signal levels with a other hardware on the same antenna connection (Tecsun PL-880 and Icom-751a). 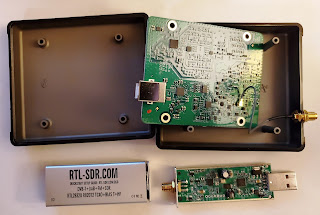 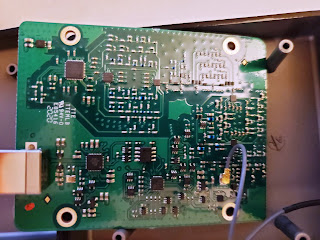 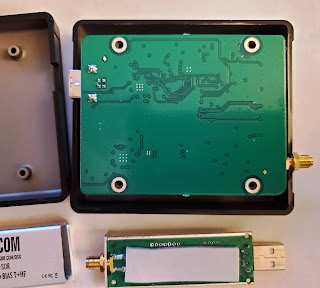 The RSP1A displayed  8 MHz bandwidth. It was refreshing to see more range above and below the LO. You may ask why only 8 MHz displayed instead of 10 MHz? It can display up to 10 MHz in some cases, but I am not sure why I was only seeing an 8 MHz spread. I did not see or hear many signals coming through the noise floor. I did not hear any DX stations while tuning the SDR.

The V3 displayed 2.4Mhz bandwidth and I saw more stations coming through the noise floor on this SDR. I was able to tune and listen to a few stations easily.

I was a bit puzzled by the RSP1A and reduced the bandwidth down to 3 Mhz bandwidth for better comparison. I was able to see and listen to some of the same stations as the RTL-SDR Blog V3 now. I could hear DX stations on both devices, but the audio was more intelligible on the V3. This is where things became more comparable between the devices and performance was similar.

The RSP1A had better sensitivity at 3 MHz than 8 MHz bandwidth. The RSP1A had problems pulling out intelligible signals in or near the noise floor. I was hoping for a more sensitive SDR with a wider frequency display using the RSP1A, but that was not the case.

Another observation was the audible noise between the two devices. It seemed the RSP1A had more noise on the signal than the V3. I found some information on SDRplay's forum from others who experienced the same issue. I did not find a good technical response or resolution to the issue.

Another notable feature between the RSP1A and the V3 is the onboard filtering. The RSP1A shines in this area because SDRuno automatically selects the appropriate filters to reduce overloading and interference while tuning. The filters work extremely well as I did not have AM/FM bleed-over on HF. External filters and add-on boards are available for the RTL-SDR BlogV3 to rival the RSP1A's built in features. AM bleed-over to HF bands is a problem with the V3 due to lack of selectable filters.

The RSP1A is housed in a plastic box with some "metallic" spray covering the inside. This is an attempt to reduce EMI and RFI. It did not perform well when I moved a laptop power brick near it as I saw numerous spurious signals on the bandscope.

The RSP1A requires a separate purchase of a shielded USB A/B cable. Those will cost between $7 and $10. Why it's not include with the product baffles me. If you want further EMI and RFI shielding, then you can purchase a metal case for $25 from third party sellers.

The RTL-SDR Blog V3 is housed in a metal case grounded to SMA jack. It also has USB filtering to reject interference. My laptop power brick had little effect on the SDR displaying only a couple spikes on the bandscope. There is no need to purchase a separate USB cable for typical installations.

The RSP1A appears to lack heat dissipation as there are no heatsinks on the processor or other components. I don't know if it is needed and did not notice any substantial drift or performance issues during the test.

The RTL-SDR Blog V3 uses the metal case as a heatsink to keep the processor stable with some non-conductive thermal tape for heat transfer. The metal housing does get warm, but I did not notice substantial drift after hours of use.

The RSP1A and RTL-SDR Blog V3 seem similar from a performance standpoint. Is the RSP1A worth the 4x price tag of a V3? That is an absolute NO from me!. There are several reviews for this RSP1A from other HAMs and SWLers praising this SDR for HF listening. I don't see what all the praise is about. I do understand the out-of-box experience is a little better with the RSP1A, but that doesn't seem to be enough reason to buy it. The V3 is rather simple to setup with ZADIG and the appropriate driver. Using Direct sampling of the V3 produced rather impressive results too.

The SDRuno software interface is not as user-friendly as it could be. It offers an extensive array of settings for the tinkering mind to spend hours tweaking and fiddling which is great. I found the workspaces thing to be a pain in the butt. I did not like the taskbar littered with several open windows. New versions are coming out frequently to address the numerous bugs in the software so I am happy to see an active development community for their product.

HDSDR is a very simple out-of-box installation as well. It just works with only minor tinkering. It is more user friendly than SDRuno for a new or casual user.

I tested both devices using SDRuno and HDSDR software. The performance of both SDRs was about the same. Keep in mind that using the RSP1A or RTL-SDR Blog V3 outside their native software offerings will require an EXT-IO driver that may reduce functionality.

I regret buying the RSP1A and should have tried another offering like the Airspy HF+. Maybe another review in the future?

I wanted to share a little update with you. I am still working on projects and have a few radios in for repair. Most of it came to a halt as my beloved Tektronix 465 scope is on the fritz. I had to change focus to repairing the scope (5V power rail had a short) and waiting for parts. I also picked up another NanoVNA to have some fun with. This VNA will be used with custom firmware and see if we can make some interesting projects out of it. Also got to experiment with a SDRplay RSP1A. You will see a review soon. 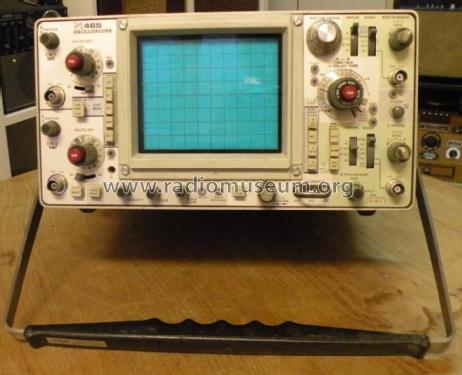 I have a couple shortwave receivers here to repair and an Icom transceiver. I will try to share some updates as time permits over the holidays.

Speaking of the holidays; our radio club held the annual Christmas party tonight. It was a bit different than previous years due to Rona and was hosted over a virtual video conference. It was fun nonetheless.

Happy Holidays and I will see you soon. Let's hope for more 100+ SFI days to enjoy DX'ing!