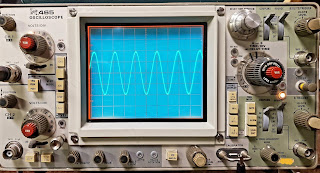 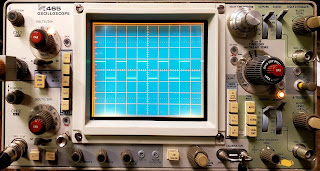 I previously mentioned that my old analog scope needed repair. I use this 465B on a regular basis to diagnose and repair electronics and was disheartened to see it failing. All radio projects came to a halt as I had to bring the trusty 465B into the operating room for revival.

The scope was operating normally until I was using it to diagnose a TV board. The front panel lights would turn off and back on at random times. The CRT would also blank out when this occurred. Turning the scope off and on would sometimes remedy the situation for 5 to 20 minutes until it completely died.

I removed the covers and measured voltages at the test points indicated in the manual. All voltages were correct +/- 1% except for the 5 volt rail. My initial thoughts were the old rectifier capacitors were shorted. I tested the capacitor in circuit and it wasn't shorted so I moved on to the bridge rectifier (CR1551). I measured 55 volts DC as expected.

Next, I moved on to Q1556 (MPS-U45). This transistor appeared to have a solder blob shorting the base and collector pins. No idea how that happened unless another component got hot? I removed the transistor and tested with my LCR meter. It tested as resistor. I ordered a new transistor and installed it. Tested for 5V and still no voltage present. 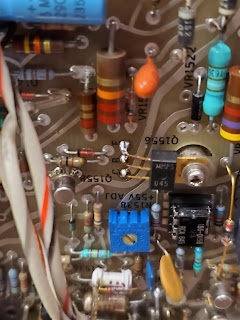 The MC1458 Op amp was internally shorted. I ordered a replacement at Mouser p/n 595-MC1458P and installed it. The scope came to life and is working great! 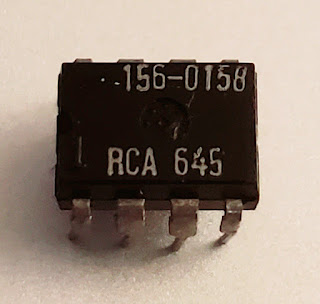