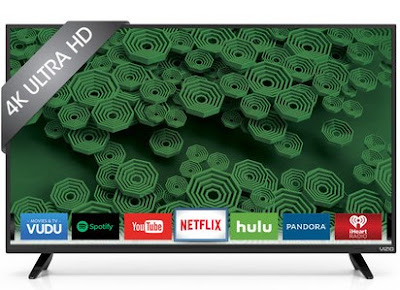 One of the other projects over the holiday's I managed to fix is my Vizio M50-C1 smart TV. This TV is one of the early 4K models introduced in 2015. The TV has been great and is on for 15 hours a day on average. It was used for playing games and watching shows/movies.

One day, it stopped working and wouldn't power on. My immediate thoughts were bad capacitors in the power supply since I've repaired several flat screen TVs with similar issues.

China doesn't offer schematics for this model so troubleshooting had to be performed the traditional way. The Vizio M series TVs from this era all used a similar, modular board design where each major function was contained to a separate board. For example, there is a power supply board, a scaler board (GPU, sound processor, and inputs), inverter board and T-Conn board.

Fortunately, the power supply was fine after checking all voltages and signalling. I noticed the scaler board had a bi-color LED and would turn purple when a power on sequence occured and turn red when the TV was off.

I disconnected the T-Conn board and ran some tests. It seemed to be working fine and would only affect how the picture was displayed on the screen. If it were faulty, then I would see only part of the screen or solid colors.

I removed the board and saw this when I flipped it over. Nasty flux corrosion on the board! Talk about subpar garbage coming out of the Chinese factory. 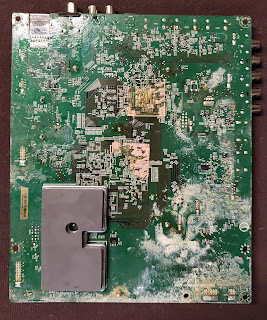 I moved on to the scaler board as the culprit and headed over to the Badcaps forum for assistance. I quickly learned that this model along with the others from 43" up to 75" had similar issues. The main cause is cracked solder joints on the BGA chips under the heatsink.This occurs over time from power cycling the TV causing expansion/contraction from hot to cold. I attribute this to poor engineering, poor design, and shoddy assembly more than typical wear and tear.

My options were to either buy a replacement scaler board, send the board out for repair, reball the BGA's with a rework station myself, or try an experimental heat gun reflow.

I looked around for a replacement scaler board and came up empty handed. Unless I wanted to spend upwards of $200 for a board (1/3 cost of the TV). I opted to try the heat gun reflow approach.

The design of this board and massive heatsink made it very challenging to perform a heatgun reflow. 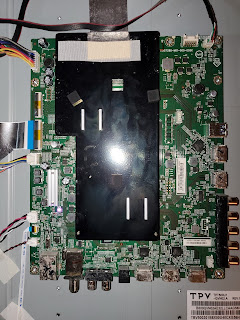 I ended up using a temperature probe and Harbor Freight heat gun to perform the reflow. I preheated the board from the back side and brought it up to 230 F over several minutes. Then I increased the temperature to about 400 F and heated the board evenly paying special attention to the BGA chip area. I kept the board at this temperature for about 15 minutes to reflow the solder balls, then let it slowly cool down to about 120 F.

I let the board sit for 1/2 hour and place it back in the TV. It powered up and worked! The TV has about 80 hours of "TV time" without any issues.

Please note this is most likely a temporary fix and not a replacement for a proper reball of the BGA chips. I added some 40mm brushless fans to the heatsink and cut holes on the TV cover to reduce the 200+ F temps down to 160 F while using the TV.

If you have similar issues, please head over to the Badcaps forum for assistance. You can also watch this video for performing a heatgun reflow yourself. If you want your board professionally repaired, then I suggest Nick's TV service.